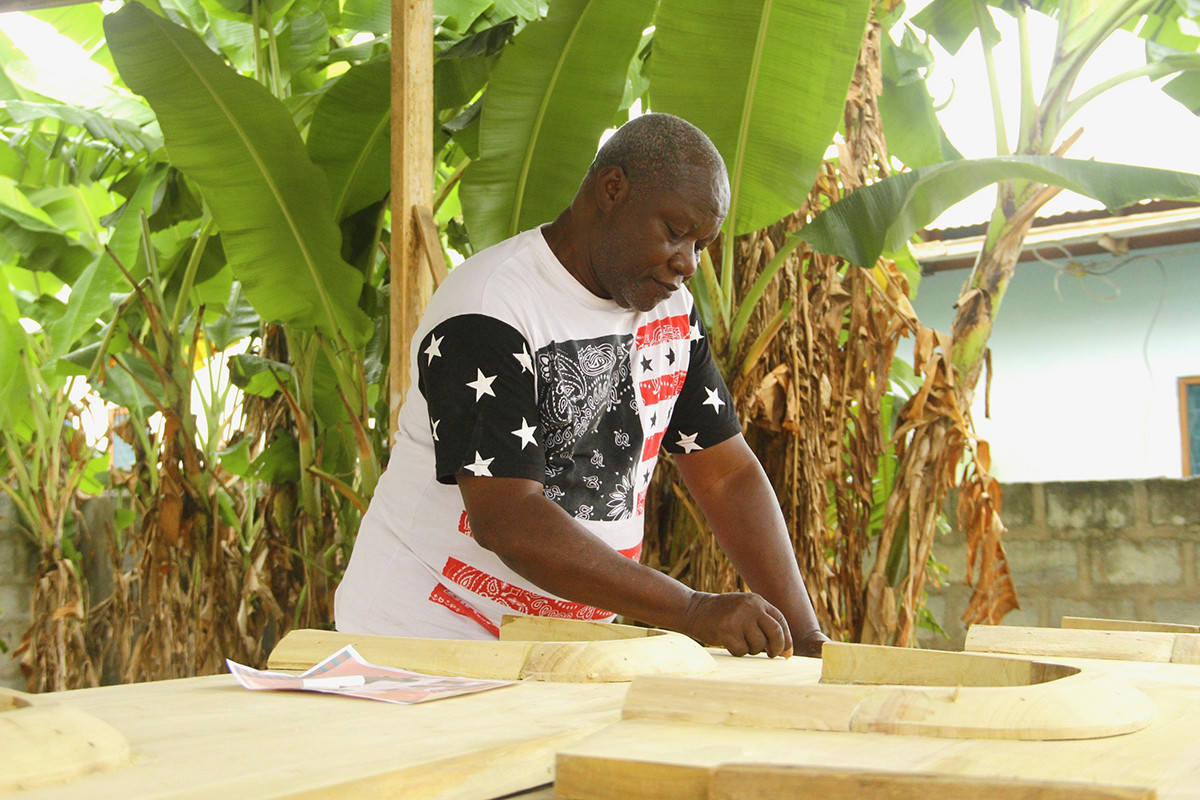 Paa Joe & The Beauty of Many Nations

The Future Perfect has acquired the first head sculptures in a series entitled The Beauty of Many Nations by artist Jacob-Tetteh Ashong for Paa Joe. Paa Joe’s artistry is rooted both in West African spiritual beliefs and in African art forms that echo a lost time. The ancient bronze Ife heads of the Yoruba and the terracotta Mmaa head carvings of the Akan resonate in Paa Joe’s contemporary work, in which he references similar hand carved techniques and mastery in the making of head sculpture, miniatures, and his large scale, life-sized coffins. For countless unknown millennia, African artists have created art as a means of communion with God, deities, and the world of spirits both alive and invisible. Based in Accra, Ghana, Paa Joe is one of the most accomplished and world renowned of such artists living today. 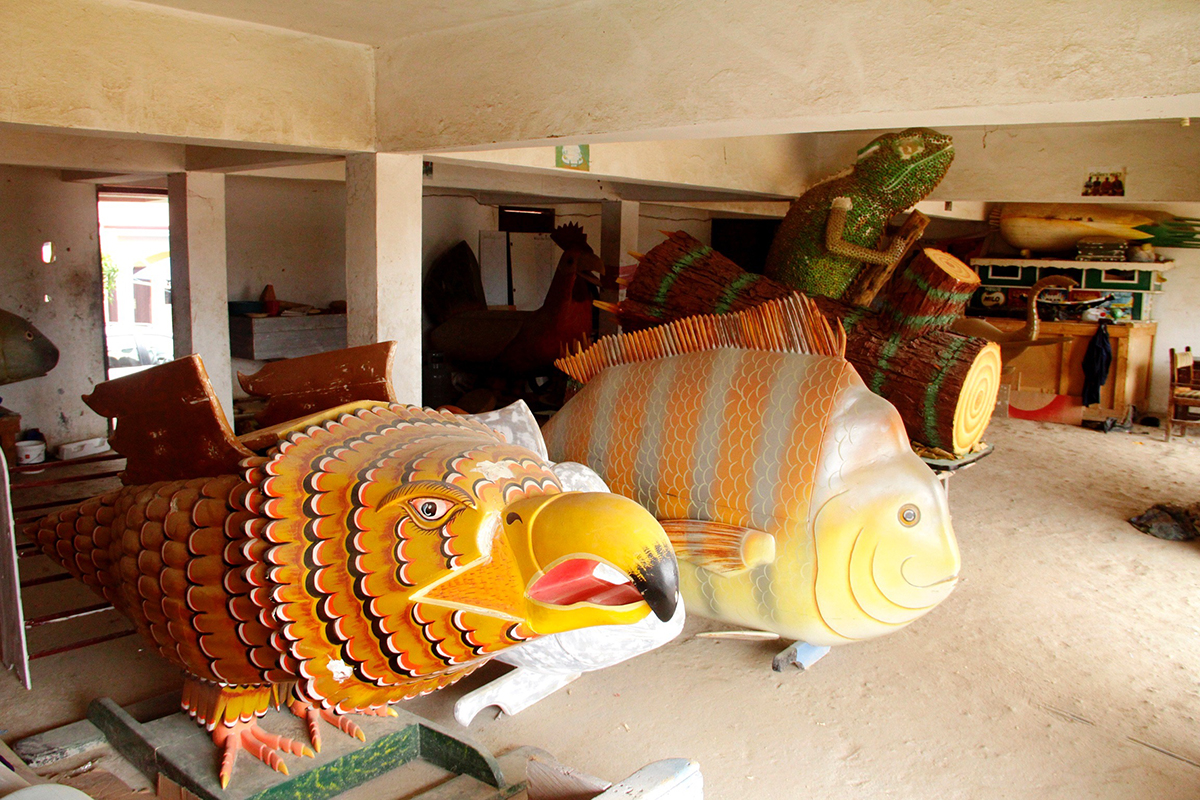 Paa Joe’s “life’s work is based on Ghanaian funerary culture. People are buried in coffins according to their profession, family symbol, or even what they’re addicted to. For instance, a farmer is often buried in a vegetable, fruit or farming tool. A businessman goes with a Porsche or Mercedes. A King goes with a Lion or an Eagle. A fisherman goes with a fish or canoe. These coffins are essential to the burial tradition and the Ghanaian community since they believe in life after death. Traditionalists also believe in reincarnation – that life continues in an unknown world, and likewise anyone can be buried in these coffins, rich or poor.” 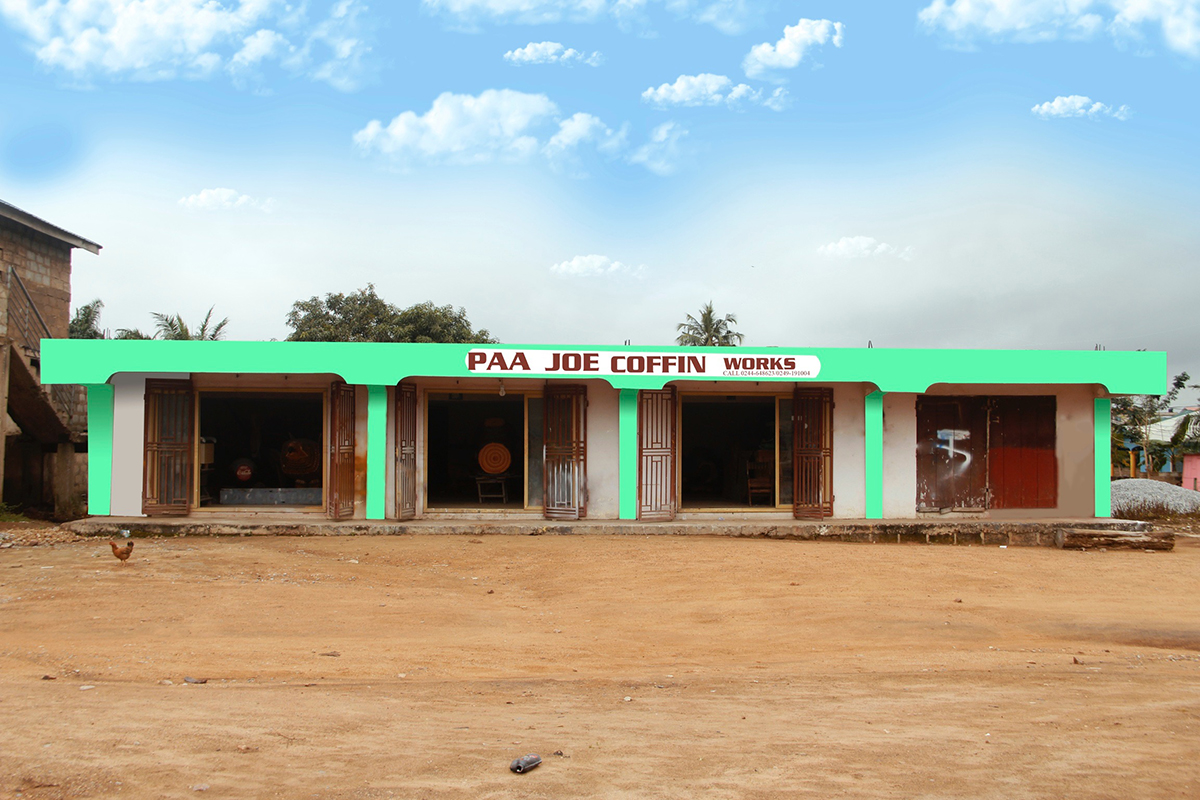 The new collection of ten fantasy head sculptures by Jacob Tetteh-Ashong from Paa Joe studio have found its home at Casa Perfect New York at the hands of Gallery Director Laura Young. As a student of Rhode Island School of Design, Young took three courses in African Folk Art all taught by Professor Bolaji Campbell. “That is when I first learned of Paa Joe and fantasy coffins in general. At the route of it all, it heavily inspired my personal artwork, and is consistently in the back of my mind when curating. After 15 years of following Paa and his work, I am beyond excited to be bringing his work into The Future Perfect.”

Laura Young sparked an intimate personal connection between Paa Joe studio and Adelaide Nana Agyemang, a visual artist and arts educator who has been working within TFP logistics and has built relationships with the gallery's clients and art collectors for over 2 years. Adelaide Nana goes to her motherland of Ghana often and has always felt an intuition that guided her to Africa's ancestral beliefs and culture, even while she was being raised in an American culture some continents away. The kismatic coincidence inspired the following interview between Paa Joe, his son Jacob Tetteh-Ashong, and Adelaide Nana. Their discussions formed strong kinship ties between three generations of practicing artists of Ghanian descent. 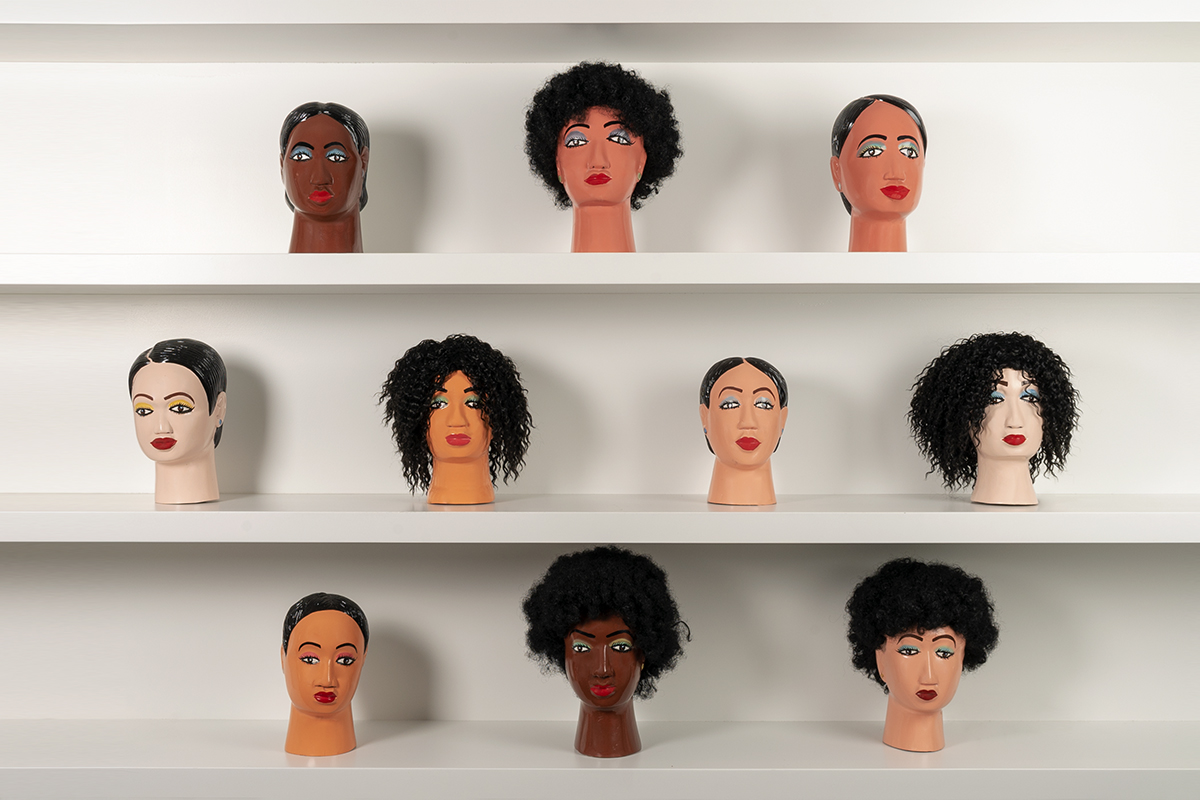 Let’s begin by talking about the Abebuu Adekai. What is the meaning and history behind the proverbial coffin?

The meaning of the Abebuu Adekai is a coffin made in the shape of a proverb. It began in the early 1950s. Before then, Chiefs were carried in a proverbial palanquin. A Chief commissioned a cocoa pod palanquin for an occasion, but unfortunately, he died before the day of the festival. So the family decided to take the throne of the cocoa pod and use it for the next chief. Eventually, the cocoa pod would serve as the Chief's coffin for the afterlife. Not long ago after this, Seth Kane Kwei, who was just an ordinary carpenter at the time, with his elder brother and their grandmother, desired to travel overseas when the Accra Kotoka International Airport was still under construction. But she, the grandmother, didn’t have a chance to travel and she died of old age. So, the two Kane brothers tried their best to bury their grandmother in a stylish coffin in the shape of an airplane so she could travel to heaven. And from there, people in the community became interested in commissioning these coffins as their way out, and into the afterlife.

Can you describe the materials and process involved in making these objects, and how Paa Joe became an internationally renowned name associated with this tradition?

The materials used in making these coffins are wood, oil paints and interior fabric. With the wood, there are two. Hard and soft wood. The hard are for international purposes and the soft for local purposes. In 1989, Paa Joe was involved in the “Magiciens de la terra” in the Pompidou Center in Paris, where he got huge international recognition. Paa Joe was also involved in many other exhibitions including the British Museum in London. There, he showed a Golden Eagle coffin. The British have always been very fascinated, and we traveled for a second time during the filming of Paa Joe & The Lion, where we went to build a coffin and raise funds for a gallery where we can exhibit our coffins. Many people have heard a lot about Paa Joe, in newspapers and through word of mouth, but they don’t know or have never seen the process, this is especially the case abroad. They want to know the techniques, because what they know is machines, you know, in the making of this, but we were using hand tools. We were using arm tools to build an entire coffin with an audience watching every step during that residency. 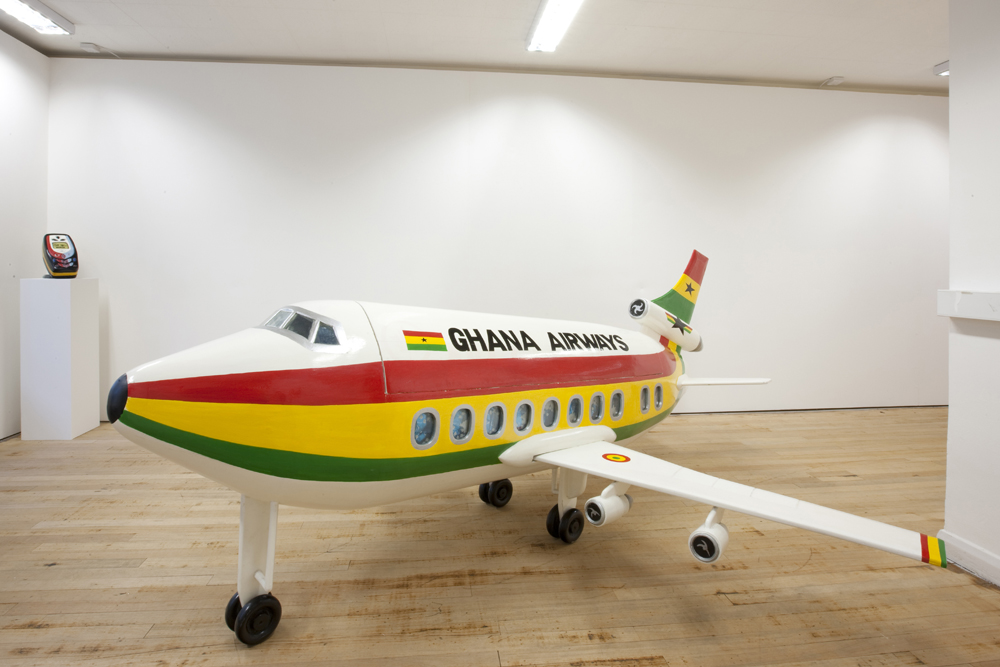 So much of your practice centers around making highly elaborate, stylized, yet functional coffins that are physically buried with the deceased – never to be seen again. As an artist, what kind of mindset does it take to create work that is so ephemeral? Is there a difference in making this series, which won’t disappear?

There is little difference. When a coffin is going on an international or display platform, I put in the same effort to make it as elaborate as one going to be buried. When making the coffins, you avoid so many things and give up many activities to complete it in time for the funeral, so yes, once it’s buried you do feel sad but that emotion too is fleeting. We know that we’ve helped that person to reach the afterlife, traveling inside this proverbial coffin. We have a proverb that says, ‘No one crosses into the afterlife barefoot.’ So you need to cross there wearing sandals, wearing a vessel and the coffin becomes that vessel. It helps you remember what you were doing and who you were in the land of the living.

These heads seem to say something about beauty, femininity, and desire. Who are these women? Are they real? Can you speak to us about the idea behind them?

These women are an imagination of the different beauty of women around the world. You know their cheeks, their smiles, their eyes, like doves. Their eyeshadow and everything about them. When I went to Cape Town in South Africa, I saw many salons and when you look at them, they are all showing a unique type of beauty. We’ve been able to see many women in the world, and you can begin to imagine...maybe, they look a lot like someone alive but we’ve never really seen the person. The heads are from the imagination, a fantasy.

Momo from The Beauty of Many Nations, on view at Casa Perfect New York. Photography by Andrew Nemiroski.

The head carvings certainly delineate a new conversation for The Future Perfect – they’re very distinct, both visually and culturally, from contemporary design objects we’ve collected in the past. How do you see these works within the context of TFP? Are these art, design, objects, or something else entirely? What is your fantasy setting or ideal environment for them?

These are designs were made in my own eyes for the context of The Future Perfect. I can see them inside a museum, I can imagine they would belong somewhere that could consign all ten pieces. Or a private collection. In my mind, I consider them designs because you can see that the style of hair, the make-up, the painting, and colors in their entirety are specific, and it was designed to look that way. They’re not really objects in that sense. They are designs, and art.

Do you see yourself continuing this series, or making work more tied to, yet distinct from the Abebuu Adekai (fantasy coffins)?

Yes, we will be continuing this series. Carving more women, rather than just one, it lets you know just how different every woman is. When you make many, one from each region, another from another region, you know, everyone is different so it brings you to the title, Beauty of Many Nations because you can see that is true around the world.

Can you describe what parts of your creative process are the most satisfying for you?

My most favorite process that I enjoy is Carving. It demands a lot of skills and wisdom. Because when you are carving the heads, you need to find where the ear is, where the nose is, the mouth is. You need to find where to carve to get the right shape. By the Grace of God, the image comes in our minds. We have the measurements in our mind. So there is nothing like drawing. How would I draw, you understand? For the heads, the images come because we’ve seen a lot of people. I have no idea who she will look like before I start, but need to find her image as I carve. 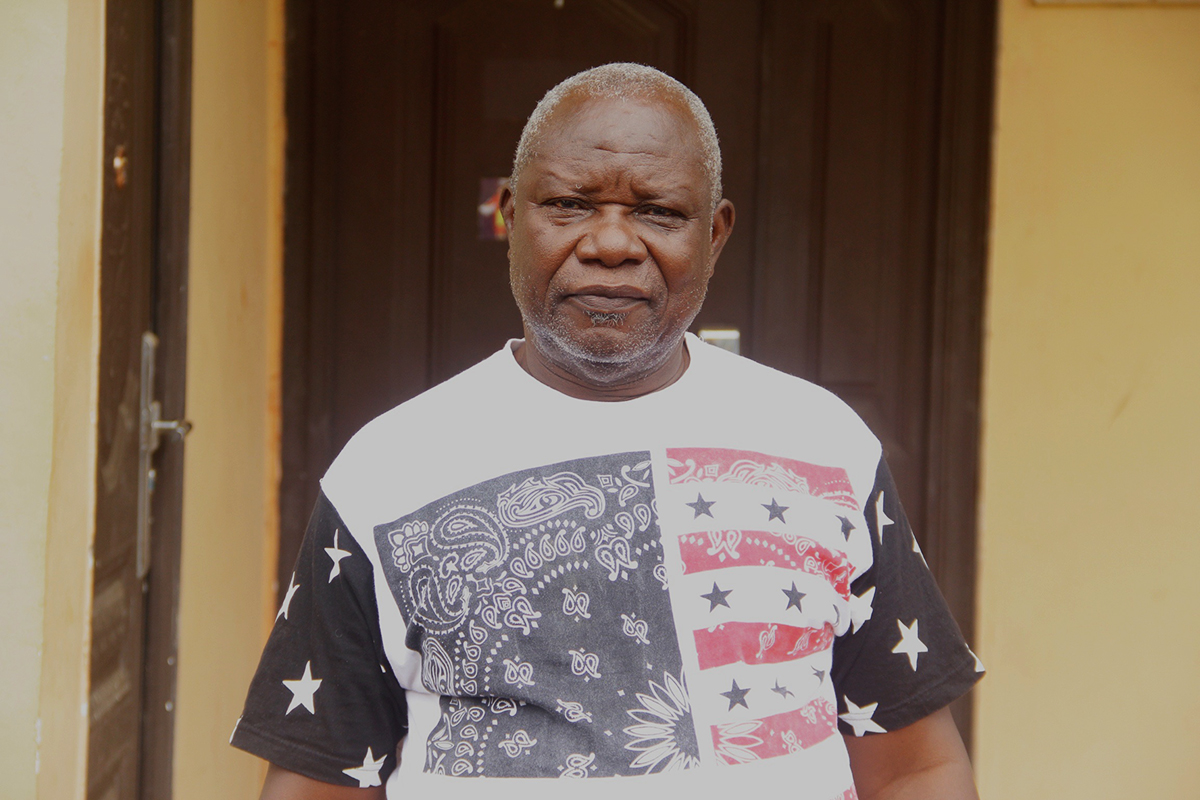